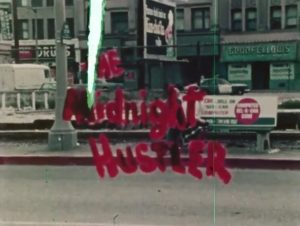 Today’s film is a basically unknown 1971 west coaster called THE MIDNIGHT HUSTLER, starring Sandy Carey and Norman Fields, with Ric Lutz and Jim Frost in supporting roles.  At a high level it’s one of the hundreds of cheap quickies that were churned out at the dawn of hardcore. But let me suggest you give it a little leeway, and look at it not so much as a stimulation device (honestly the carnal aspects of it are in my opinion somewhat awful, and almost clinical bordering on gynecological at times…) but rather as a time capsule of a place and time that no longer exist.  I also want to look at it as a companion piece to another, more well known film, also from 1971.  After the particulars we’ll start with this angle first.

A number of films have been compared to FLESHPOT ON 42nd STREET, so I figured I might as well throw my hat into that ring as well.  But I do truly believe that the film we’re looking at in this post, The MIDNIGHT HUSTLER, is the closest thing to FLESHPOT having a big west coast sibling that I’ve found, because in a way, much like siblings, they are mirror images of each other. But not the simple, clear reflection you’d find in an ordinary bedroom mirror; more like the smudged, scratched, and skewed mirrors you find in funhouses, which stretch, tighten, and distort the image, although you can still make out the similarities. Let’s float around this idea for a few paragraphs. 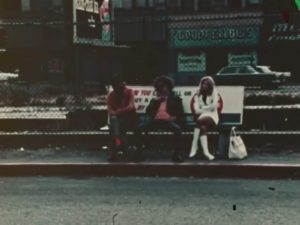 To begin with, both stories are about a ‘lady of the night’, or hustlers, Dusty (Laura Cannon) in FP and Gail (Sandy Carey) in MH.  But where the Dusty character starts the film out by robbing and abandoning her live-in John, and her pawnbroker as well, Gail’s story starts out by her getting robbed (of $5) by her latest John.  They both then flee to the safety of the commons, Times Square for Dusty and a park in San Pedro for Gail. They both very quickly meet their “savior”, Cherry (Neil Flanagan) and Angie (Normal Fields) respectively.  And both are lured into their webs by the promises of food and a place to stay. It’s here where things start to skew and distort a bit between the two story-lines, because while Dusty is offered one of Cherry’s Johns, it’s Angie himself who is Gail’s John at this point.  So in a way Gail becomes not only Candy, but also Jimmy (Paul Matthews), to a point, as well as in the end even Bob (Harry Reeves). So the image stretches and tightens here if we can continue to strain the metaphor a bit further.

Angie takes Gail to a party at The Creep’s (Ric Lutze) house where she is again pimped out, whether intentionally by Angie (who we learn is known as The Slug in the underworld of San Pedro) or just as a matter of habit is not clear, but it’s not unlike Candy pimping Dusty.  With a little flexibility and further stretching of the already thin-iced mirror metaphor, I would suggest this party and the bar scenes in FP are two peas in a pod: both play pivitol roles in the overal plot (such that it is in MH), and both are scattered with eccentric people doing somewhat questionable things.  And both have a musical element, although I’m going to have to give MH (see note further down) the points on this one over FP.

A Note on the Music

At the beginning of the party at the Creep’s house you can hear music being played while the debauchery occurs all around a smiling Ric Lutz.  And the song isn’t half bad, in fact it’s rather catchy. It took a bit of digging, but I was able to determine the song is call “I’m On the Road To Memphis”, you can clearly hear that refrain, and it was by a group called Catch in 1969 and written by Mike Collins and Roger White, both part of Catch, and other groups throughout the 1970s.  I tracked a copy of their one self-title album down, and while the slate is varied in style and quality, it’s a pretty good little find. The song “On the Road to Memphis” was covered in 1971 by Buddy Allen and Don Rich on their “We’re Real Good Friends” album, but it is very clearly the original 1969 version used in the film.

And just as Dusty gets in over her head with a rough sex situation, Gail finds herself in effect being raped by Ric Lutze’s Vince, aka the Creep, in a way becoming the other part, the violent part, of the FP Jimmy character. It’s here that the only major deviation takes place, when Howard (Jim Frost) comes to Gail’s rescue, but for a price (sex, of course).  So whether Howard saving Gail was an act of selfless chivalry or an act of selfish carnal urge is up for discussion.  In any case, Angie sees them leaving together and assumes Gail has abandoned him.  This is flipped from FP, in which Candy basically abandons Dusty, at least from a loyalty perspective, and then once figuring out Candy’s betrayal Dusty absolutely abandons Candy. 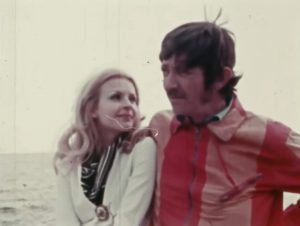 But Gail hasn’t abandoned Angie, she returns to the apartment, where they yet again have very uninspiring (to watch) sex, complete falling in love (finally completing the Dusty/Bob link), and then walk off literally into the sunset on a jetty.  Again, a major deviation from FP, but I won’t spoil the ending of that for you (go see it if you haven’t, we’ll wait…).  They spoke of maybe going back to Oklahoma where Gail was from.  You almost want everything to work out for Gail and Angie, and maybe it did (I doubt it though). 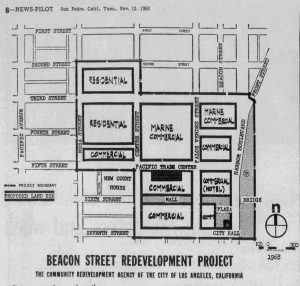 One final similarity between FP and MH is the locations in each in effect become a character in the films (Times Square and Beacon Street), and both have suffered similar fates: almost every place you see in both films has been demolished, or perhaps I should say `redeveloped”.  Time Square’s long saga from the pit of sin and iniquity it was in 1971 to the Disneyfied shell of itself it is today is well documented and over-analysed everywhere, but the destruction and redevelopment of Beacon Street (via the Beacon Street Redevelopment Project) is all but forgotten, except perhaps by the folks of San Pedro. 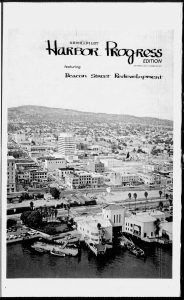 San Pedro, where MH was filmed, was LA’s shipping waterfront for decades and had been described as “the Bowery and the Barbary Coast rolled into four blocks – a stretch of salty concrete that earned in blood and guts of an era past the title of ‘the toughest four blocks in the world'”.  Sign me up! It was littered with beer bars, cheap restaurants, SRO hotels and flophouses, in short it was a lot like Hell’s Kitchen in 1971. But the so-called Community Father’s had had enough by the late 1960s and began the “renewal” process of getting government grants to buy up the water front blocks, demolish everything standing, and then redevelop the area with a bright, shiny, clean, and safe new mecca by the water.  Most of which is still to be realized (although they did complete the demolition, of course).

By late 1970-early 1971 the first two phases of lot procurement were complete and the first wave of demolition was slated for early/mid-1971.  In fact we can date the filming of MH to no later than January 1971, because we can clearly see in once exterior scene that Hirschman’s Drug Store, on the corner of 6th and Harbor, was still open, although the final sales signs can also be seen.  Hirchman’s had their final-everything-AND-the-kitchen-sink sale the week of January 21, 1971, so these exterior scenes had to be prior to then. As for FP, we can date the filming of at least the opening montage to mid-March 1971 based on the theater marquees, thus making MH the slightly older sibling to FP.

All that being said, there are two locations from MH that still exist, the opening shots of the bridge, ship terminal, and San Pedro Municipal Building, and the closing shots on Belmont Shore Beach, two nice bookends to the story.

My initial interest in THE MIDNIGHT HUSTLER sprung from those early scenes of the bus arriving, dumping Gail off, and that entire environment that was around her.  The grimey park, the trashy streets, the decaying buildingins.  I just had to find where that was.  And as you’ve probably guessed, I was able to identify almost all the locations from MH, with the notable exception of the location of the party.  So here then are shots from the film, and what those places look like today, post “redevelopment” in most cases. I’m not sure progress is the word I would use though…

S. Harbor between 6th and 5th Streets – everything demolished in 1971 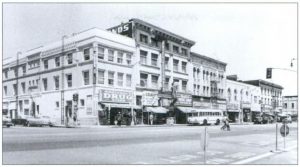 This picture from 1950 shows the entire block that in a way becomes a supporting character to MH.  Hirschman’s Drugs, Loans, Alexander Hotel (where Angie’s apartment was), Harbor Mens Shop, Tommy’s Goodfellows (clearly seen in the background of several shots), Mission Smoke House, Getaway, and the Criterion.  All of it demolished in 1971. 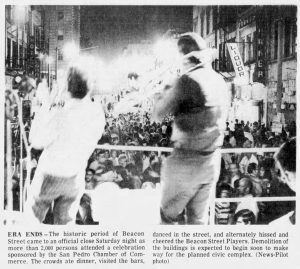 Before the buildings were felled they threw a party, one Last Night On Beacon Street.   A couple of thousand people showed up, they reopened the closed bars and from accounts a great time was had by all…except the winos and derelicts, the sea-hobos and the tramps, the hustlers and the whores, who had lived on and around Beacon Street.  No, the natural inhabitants of Beacon Street were mostly kept away from the festivities, either because they couldn’t afford the ticket price, by the bribes of cigars from the cops, or for fear they’d be booted out, so that creme-de-la-creme could enjoy their night and have one last good memory of the old Beacon Street (even though I’d bet a good lunch at the Capri 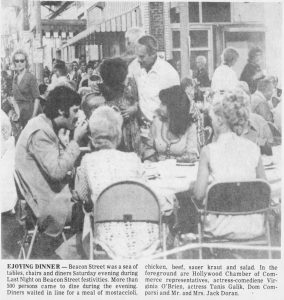 Show World lunch counter that it was the first and only time a good number of those party-goers had ever even ventured down to Beacon Street).  As the San Pedro News Pilot put it, “Some (winos,et al) came to the party, and stood with a beer can in one hand and a bottle in the other.  After the party was over, they sifted through the litter piled in the street and through the refuse cans.  Their last night on Beacon Street will not be until next month.”

I wonder if Gail and Angie made it in to the party, or if they were part of the hustlers and whores that were kept out for the night.  Or maybe they were already back in Oklahoma, starting a new life together… 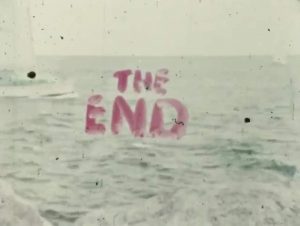