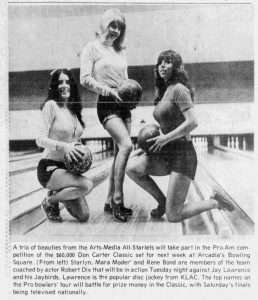 Nothing says 1970s like a bowling tournament and a bevy of bodacious babes. Especially if two, if not all three of the lovely ladies, are also adult entertainers.  And that’s exactly what the lucky attendees of the 1972 Don Carter Classic at Arcadia (CA)’s Bowling Square in January 1972 got: the Arts-Media All-Starlets!

From left to right we have Starlyn (Simone), Mara Moder, and Rene Bond.  Two of them were already well on their way to becoming well known adult film actresses (Rene Bond of course being the bigger name), but who exactly is/was Mara Moder?  And why were these three schlepping at a bowling alley of all places?

This was not the last time Rene Bond would show up at a sporting event.  In fact she would be named “queen [lower-case in original] of the All-Pro Championship race series” at the Orange County International Raceway in February 1972.  How this title was achieved, and for how long she reigned are both unknown.  But I bet a good lunch at the Capri Show World snack counter that it was directly related to the Arts-Media All-Starlets.  My guess is this was the work of a modelling agency, perhaps Arts-Media, but even though I’ve dug somewhat deep I’ve yet to find any other references to an A-M.

Given Rene Bond was participating in these events it probably shouldn’t come as a surprise that another starlet like Starlyn Simone, who was already nearing what would become the half-way point of her adult film career by early 1972, would also be there.  And while not the focus of our post today, she will, at some point, get her own bio-post.

A quick note on the fact that two relatively well known adult film actresses were out in public without even a hint of their “day” jobs: this was 1972, before Twitter, Facebook, Instagram, or even the (public) internet.  And if someone actually recognized them (and let’s face it, at these two events there probably was a decent number of guys who did) what were they going to do?  Tell their family “Hey, that’s Rene Bond over, you know, from COUNTRY HOOKER…”

As best I can reconstruct, Ms Moder was born (probably) in Wheatridge, Colorado, around 1945.  Her father, Edward, operated The Jefferson Sentinel in Lakewood, CO.  He died in 1960, when Mara would have been 15/16, leaving herself, her mother, her sister Theresa, and her brother Michael behind (all of which are now deceased).  Ms Moder would have been in high school, as can be seen from these two yearbook pictures (1960, 1961, and 1962). 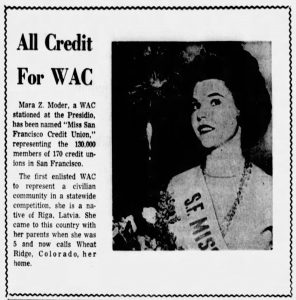 The next time we can date Ms Moder’s location is four years later, where in November 1966 she was crowned “Miss San Francisco Credit Union”, and we find that she is a WAC stationed at the Presidio, and the first enlisted WAC to represent a civilian commynicty in a statewide event (whatever THAT means?).  But then her history get’s questionable, because the article indicates she is a native of Riga, Latvia and came to this country when she was 5.  I find this hard to believe, because it seems her family was well established in the Wheat Ridge area.  But in any case, Ms Moder was already gearing up for “the spotlight”, so to speak.

Another three years pass before Ms Moder again turns up in another beauty contest, this time in Rosarito Beach, 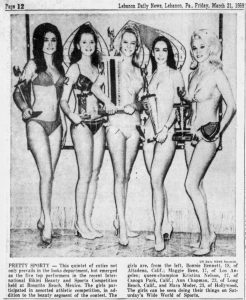 Mexico, at the International Bikini Beauty and Sports Competition (whew).  Ms Moder did not win (she was third runner up), but she at least did better than another aspiring future actress, Misty Rowe, who was also among the 60 other contestants (although in the end Ms Rowe did have a longer and more well-known career).  And as icing on the cake, if you were tuned in to the Saturday afternoon Wide World of Sports on March 22, 1969 you could have seen her and the other contestants “doing their things”.  Well now. 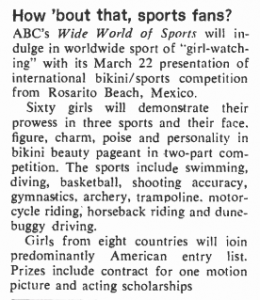 Worth suggesting, whatever that IBBaSC was, it at least had a hint of the Arts-Media labels that were thrown around later in 1972, and the IBBaSC itself would show up at least one more time on WWoS, in 1972…

And then after this, aside from the bowling event we started with, Ms Moder’s trail goes cold, for good (so far).  I’ve found nothing on her after January 1972, which leads me to believe she is probably still alive somewhere, hopefully living a quiet life, and probably left all this behind her a long, long time ago.  And if so, then the best to her.

But that wasn’t ALL that I found… 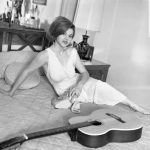 At some point in the 1960s Ms Moder particpated in at least one or two modeling shoots, evidenlty with Ron Vogel, the well known photographer of the era.  And here, for your historical consideration, is the results of those shoots (remember I did say earlier that she wasn’t exactly a prude…).

So the questions now are, was this the extent of Ms Moder’s modelling career, did she do anything “harder”, and what happened to her after 1972?  I’ve added her to the long list of mysteries that I keep in the back of my mind as I sift through the sands of smut history. [see update]